Playgrounds Take a Hit in England

Playgrounds are big news in England over the last couple weeks. On August 4, people in cities and towns throughout the country participated at over 860 events organized to celebrate the 22nd annual Playday campaign.

This week The Guardian, Channel 4 News (with four minute video), the BBC and The Mail Online are reporting on funding cuts to the former Labour government’s Playbuilder scheme.

Formally launched in 2008, the policy initiative earmarked £235m to be accessed by 122 local councils (at £1.1m per council) to build 3500 playgrounds. Numerous playgrounds planned to proceed to the build phase this year risk being scrapped altogether.

In a letter to local authorities, Education Secretary Michael Gove wrote, “…play has to make its contribution to tackling the deficit along with other important programs.” Communities are looking to see how they themselves can fund projects that are now in jeopardy of not proceeding.

Play England has issued a news release outlining its response to the Government’s plan to identify savings through reductions to the Playbuilder scheme. Numerous observers comment on the country’s soaring child obesity rates and the role that playgrounds may be able to play in reducing this trend.

This week, with plans for many playgrounds under threat, it’s not play as per usual. Parents can be forgiven if they’re not feeling quite as much love in jolly olde England. 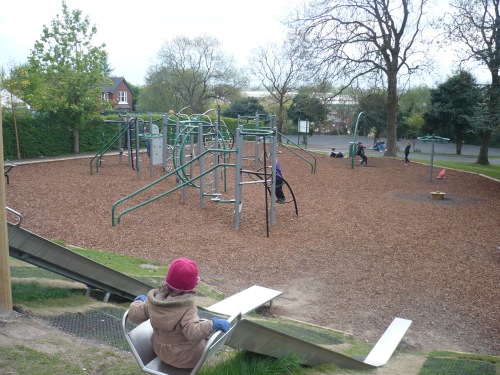 See below opposing views on the cuts to the Playbuilder program from two bloggers in merry olde England.

In this corner, in support of the cuts – Of Playgrounds and Spending Cuts.

And in defense of continued playground expenditures – Milk and Playgrounds.

2 responses to “Playgrounds Take a Hit in England”