Popular Mechanics on the Playground Beat

I remember Popular Mechanics as a boy growing up in the 1960s. One of the trademarks was a small font size. They also had wondrous plans, superb graphics and fine photos. Until I stumbled across an old issue, I had never considered it as a resource for playground research. At the turn of the last century, Popular Mechanics had started chronicling the playground world in the United States. Who knew?

Nearly 500 cities now have public playgrounds and about half of them receive municipal support. In 257 cities last year over $2,500,000 was spent on 1,543 playgrounds, and 4,132 attendants were hired.

“Providing play under intelligent direction,” was a primary motivator in the development of playgrounds as stated in the October 1913 issue of the magazine (see below). At the time, playgrounds were a relatively new phenomenon. The article comments on a governance shift moving responsibility for playgrounds from the oversight of private citizens to municipal governments.

The same article also relates the story of a New Orleans fly swatting contest. Nearly 4.5 million flies were dispatched in a two week period by 32 boys. Had Guinness been around surely they would have had a record on their hands.

Over the ensuing decades, the publication continued to print articles on do-it-yourself playgrounds, innovative playground design, and the latest trends occasionally going beyond America’s shores in search of examples and stories. 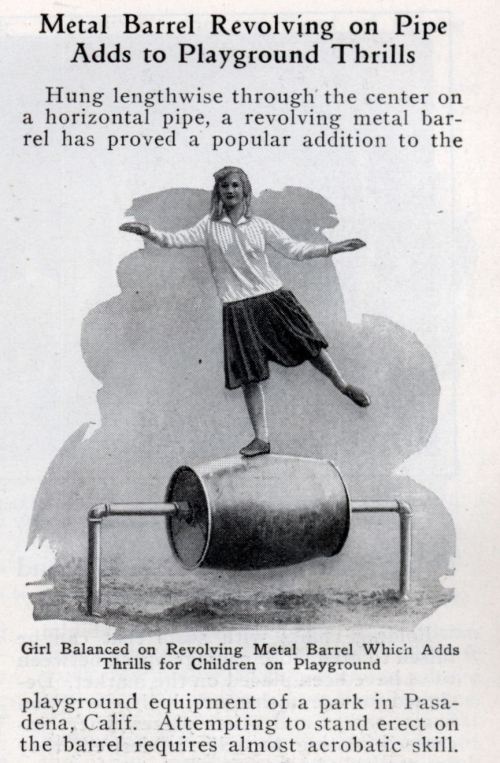 The October, 1924 issue featured a drawing of a revolving barrel worthy of inclusion in any lumberjack competition. It looks like a lot of fun but it’s not the type of equipment that would pass muster by today’s playground safety standards.

In the early 1930s, the magazine offered a do-it-yourself article for a backyard playground with a kid-powered mini Ferris wheel, a roller coaster simulation and a treadmill. In spite of what looks to be a lot of fun on paper, none of these apparently had the staying power to become part of the conventional playground canon.

This photo taken in Copenhagen is an early example of an adventure playground. The concept of a space that is forever being tinkered with, a kinetic design and build studio for kids, went on to become popular in selected communities around the world. The build it approach fit right in with Popular Mechanic’s do-it-yourself focus.

Currently, adventure playgrounds are relatively few in number and in some instances under threat but the passion of their supporters is legendary. A recent example of citizen engagement that saved one adventure playground from possible destruction is in Irvine, California.

In 1956, the publication explored playgrounds with ‘imagination’. Primary examples of this new departure in playground design and equipment were drawn from California – specifically Oakland and San Francisco. It’s a time of experimentation, a time when designs embrace aesthetics and functionality.

Rounding out this PM retrospective is the ‘taking the hurt out of play’ piece from the September 1963 issue. It’s all about safety and reducing the risk of injury.


View this document on Scribd

A half century of playground commentary starting nearly 100 years ago and many of the issues remain in play today. Around the world there is still inadequate space and resources being dedicated to playgrounds. Individuals, community groups and international organizations in North America and beyond are advocating to improve this situation. Design is ever evolving and will continue to bring to light new and imaginative structures and spaces. Witness this year’s inaugural Playable10 competition out of Atlanta. And of course there is the perennial debate around safety. 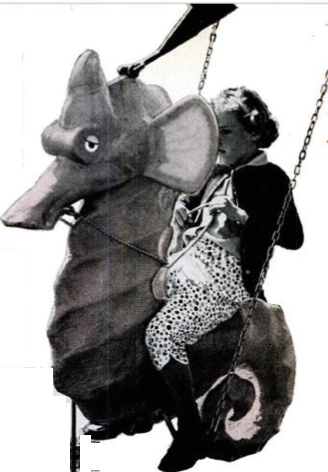 There are a few more gems left from my Popular Mechanics archival searches. There are some other publications that have printed interesting playground articles over the years too. Stay tuned to read more about them in a future post.

All images and all articles – Popular Mechanics.

2 responses to “Popular Mechanics on the Playground Beat”