The Flakes Are Aligned

Snow glorious snow! It’s not too often that I feel this way about the icy crystals but on this day the flakes are aligned as we drift though an outdoor adventure. The mercury is dipping to -15°C and colder still with gusts from the north. Together wind and snow are fashioning new designs everywhere in yards, roads, fields and forests. Behind the house, a pluming spray curls off the end of a cresting wave that didn’t exist an hour earlier. City plows are making a small mountain in a cul-de-sac, an irresistible attraction for the neighbourhood kids who sled and rough and tumble on the hill. Even the boughs of trees are laden their temporary mantles weighing them down.

There is a freshness outdoors as the snow crunches underfoot. The sky is clear and luminous, the air pristine. The cold is like a chilled powder wash on exposed skin. We walk toward the path that will take us to a small pocket of wildness, stands of alders and evergreens and a brook running fast enough to escape a sheathing of ice. Last year’s perennial weeds are brittle and brown. Some have crowns that haven’t been buried, others are a single stem in various stages of breakdown.

Sleds are thrown to the ground in readiness for swooshing descents down a small slope. First it’s head first, belly down and then the more daring snowboarding stance. Up and down, up and down until well worn tracks are cut for climbing and smooth trails packed for sliding. There is tumbling and rolling in the snow, shouts of encouragement and laughter at impromptu wipe outs. 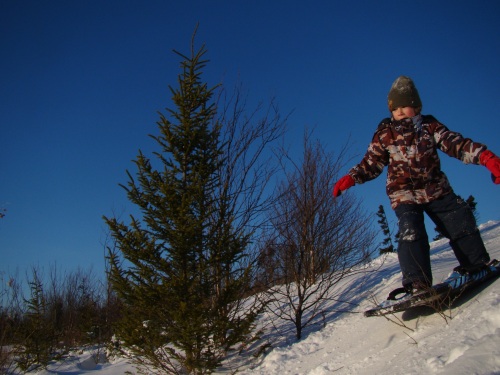 After wrapping at the winter sports station, we charge over a stream and sweep snow from the bridge. It cascades into the water where the frozen faerie dust dissolves. Here the the trees are thicker and the stream slows enough in a small bend to allow ice to form. It withstands the force of hurtling rocks and soon the inability to chip, crack or break through entirely causes the kids to move on.

There is some more bridge play, some skirting around the banks of the flowing water and poking about in the trees to see just how deep they can bury themselves while still walking. Nellie, Noah and I make our way back home unhurriedly and see that we’ve been outside for nearly two hours. Our faces are flush and we’ve worked up healthy appetites. I love these sweet expeditions with the kids – close to home, simple activities and an appreciation for the natural world and the rapid transformations it can make.

Snow is the champion weather event for our kids. We never hear them yell excitedly about the heat, rain, or wind. But once the snow starts to swirl, the excitement level quickly rises even moreso if it results in school and work closures. At our house, a snowstorm is truly a celebratory event.

This time with Noah and Nellie reminded me of snow days past. When I was in Grade 3 like Noah is now, our family lived for a winter 91 miles north of Sault Ste. Marie in the bush. It was a small community with a couple of families and men on their own working a hydro project on the Montreal River. One day my Dad took me snowshoeing. We saw abandoned bird nests, rabbit tracks and an osprey with wings outstretched in winter sky. It was the only time I ever snowshoed and it’s a memory I still hold dear.

Many years later, in Bathurst, New Brunswick I was part of a youth exchange involving young Senegalese and Canadians. When the Senegalese first saw snow, they engaged for the most part with the wonder of children. A few danced in a combination of joy, astonishment and disbelief. It was very much about touching, tasting, feeling. It was great to see people in their teens and early twenties let go all pretenses during their snowy encounter.

What a wonderful gift from the kids helping me regain a sense of wonder and anticipation about the deep, drifting snow. Before you know it, I’ll be talking joyous celebration and yelling from the rooftops as the next storm winds its way across the land. But until then, I have miles to go before I sleep.