A Billion Loose Parts Give or Take

Every January there’s an outdoor event in Halifax, Nova Scotia to welcome new immigrants to the wondrous world of winter. For those who come from winter-free zones, it is tingly, heady stuff.

This year our merry band of Adventure Play YHZers join the celebrations. It is our second public event. We have a sweet selection of loose parts on hand including PVC pipes, tires, milk crates, cardboard boxes and a multilingual sign welcoming people and inviting them to play.

These quality play pieces were sure fire winners back in the fall with green grass underfoot. This time though, we are outflanked by chill temps and a fresh fall of snow. According to Reddit, there are about a billion snowflakes in a cubic foot and eight billion or more in a snowman. 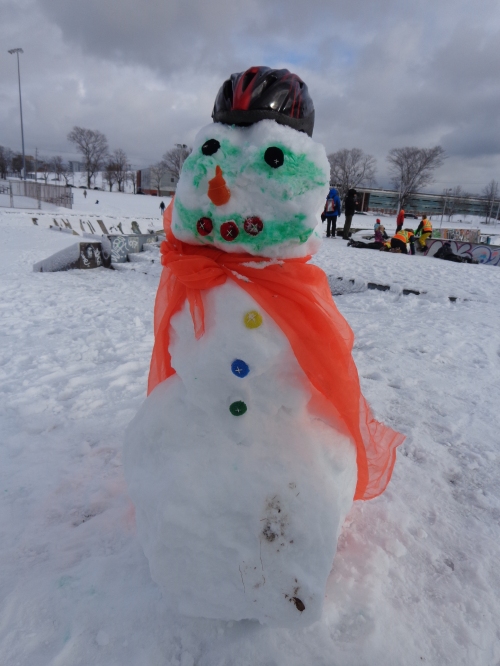 It’s hard to compete with these naturally occurring loose parts – each flake its own unique shape – unless it’s with something that transforms the snow such as shaping it into bricks. 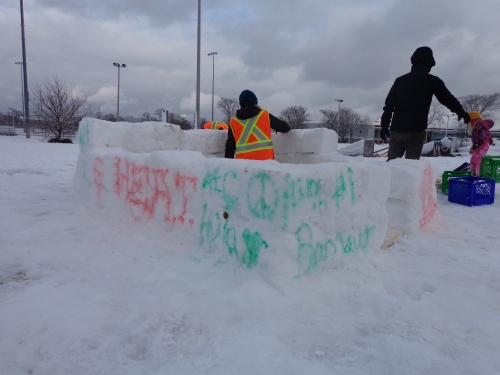 Close by our loose parts central, which isn’t suffering from overcrowding problems, there is one of the many off the shelf playgrounds that are found throughout the city. This is one of the larger ones close to the downtown core on the Halifax Common a large expanse of land that dates back to the city’s founding in the mid-18th century.

Our kids grease the slide with snow to speed their descent into a cold embrace. Snow makes all the equipment just a bit more slippery – stairs, ropes, rungs and slides. The kids practice being sure-footed and enjoy the thrill from a hint of risk.

Also within a shout is the city’s biggest skatepark. There are no skaters dropping off the edge of the bowl into the collecting snow but kids are finding other ways to make this an all weather venue..

It’s not everyday that you have a chance to get the adrenalin pumping in an unanticipated adventure. Future winter visits to the Halifax Common with our gang will now include a de rigueur pit stop at the skatepark. 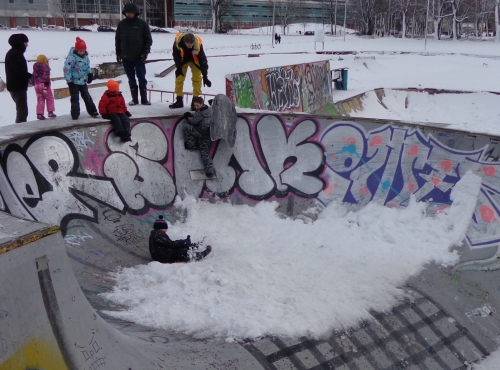 I’m on the precipice sitting on a kids’ plastic sled legs akimbo. I steel myself to drop over the concrete lip. It’s a minute or two before I push off in a wonderful flash of inelegance.  The kids are braver as they zip down and clamber out sliding their way to saturation, snowsuits sopped through and through. For them, the wet discomfort is a small price to pay when discovering a new snow delight spiced with a dash of fright…

We have to leave early to get one of the girls to a birthday party. As we prepare to go, families of new Canadians are starting to cross the street as they leave the The Oval, the city’s outdoor skating venue of choice.

On this particular afternoon, snow rules. One of nature’s loose parts par excellence takes the day. Welcome to winter….

One response to “A Billion Loose Parts Give or Take”