Skating in the Imaginarium

Editor’s note – As our kids move into their teens, I’ve been waxing a bit nostalgic. This post was originally published almost 10 years ago to the day in The Finest Gift, a blog celebrating parental leave. We had a lot of merriment with organically sprung inventive moments that the kids fashioned themselves. Each day was infused with creating their own worlds of play and transforming the sometimes mundane spaces around them into extraordinary kidscapes.

Two things strike me still. The simplicity and staying power of their creations – the lego skates (see below) were à la mode for nearly a year – and how this pre-school play was a foundation for so many things to come and continues to reverberate to this day.

Noah’s pining for a skate. Since stepping off the ice at Parc Monseigneur-Nadeau’s outdoor rink, he’s been waiting to lace up again. Our regular morning outings at Cole Harbour Place aren’t happening for us this week.

His desire is palpable, bubbling, ready to burst. Noah usually pipes up once a day, “Papa, when are we going skating?” I don’t think we can wait until our next regular Cole Harbour date. I need to check other rink schedules for public skates.

In the absence of getting to the rink, Noah turns the family room and the upstairs hallway into his own private ice surfaces. This is a pretty standard move. They become the arenas for his beloved hockey games with myself, or Nellie-Rose as his doomed-to-lose opponents. The atmosphere here is quite heady with daily dosages of Olympic hockey and Noah’s own brand of early morning, mid-afternoon and evening indoor pick up games. 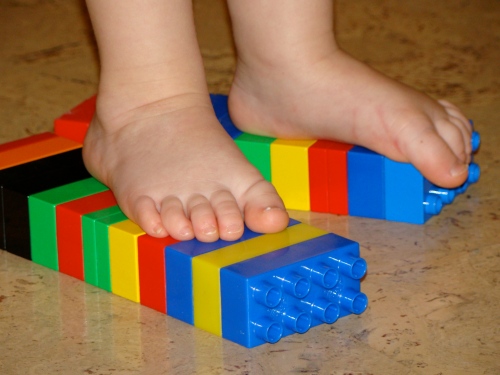 What is quite remarkable however is Noah’s invention of skates for floor surfaces. He fashions blades with Lego blocks (well actually Lego’s younger sibling, Duplo) and glides around the basement floor as if it was the most natural thing to do. By now I’m used to seeing Noah and Nellie on their multi-coloured blades but I continue to marvel at the inventiveness that has such transformative powers for these building blocks. I no longer exclaim about the ingenuity of it all each time I see the skates getting ‘laced up’ but I still smile deeply at the imagination making it all possible. 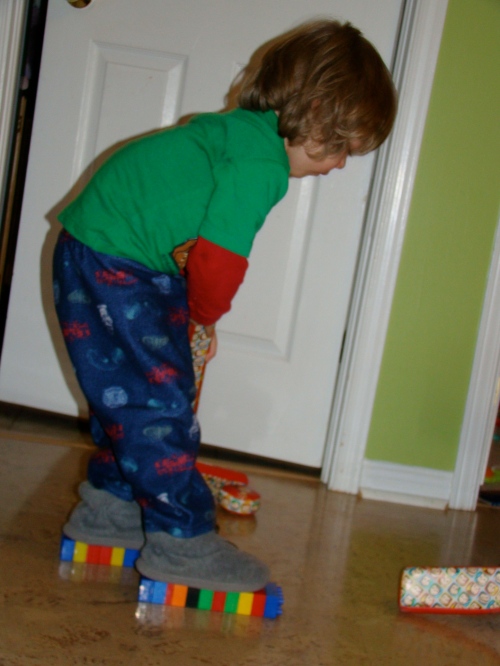 Nellie-Rose is smitten with the new skating technology. She has no ‘real’ skates of her own and hasn’t been on the ice this year. These ‘skates’ put her and Noah on a level playing field. Her recent interest in hockey, gauged by her willingness to play with big brother, has gone through the roof.

The first series of the Lego skates was made with single blocks. Version 2.0 is made with double blocks making for a more comfortably fitting skate. There has also been some experimentation with the blades’ length. The longer blades are hinting at speed skates. Nellie is quite steady on her feet. She moves in an actual skating motion to get her and her Lego from place to place.

Noah takes his ‘skates’ to bed at night maybe in an effort to dream them into real blades. Our lad’s imaginarium is certainly hard at play. It’s great to see him fashioning the world around him and having fun in the process.

This morning he thumped me 10 – 4 in the Eastern Passage gold medal Olympic Classic. That’s right, he was Team Canada.

I’ve got to track down the manufacturer and get myself a pair of those specialty skates for our downstairs scrimmages. Maybe they’ll help me win a game or two.

This entry was posted in duplo, imaginarium, lego, lego skates. Bookmark the permalink.

2 responses to “Skating in the Imaginarium”