The Children of Fogo Island – Documentary

It’s the summer of 1967 in a remote region of Newfoundland. Local kids are shadowing a documentary film crew on Fogo Island in Canada’s far east. Their status as curious onlookers is flipped on its head when the director turns the camera on them. The kids become part of the action.

Now there may be a hint of performing in their antics, they are kids after all, but it falls short of performance. Theirs is a joyous embrace of familiar outdoor activities where the elements set the tone. The unstudied choreography du jour cuts through rocky land, salty sky and chilled coves attesting to a freedom of movement, a playful ingenuity and matter of fact encounters with risk.

The Children of Fogo Island, is a quiet tour de force. Shot in black and white and running at 17 minutes it stars Fogo kids engaged in everyday capers. With minimal dialogue and a jaunty music soundtrack, there is little to distract from the unfurling action. However, it wasn’t the kids’ brilliant poetic canvas of fort makers, stilt walkers, bush pilots or ship captains that attracted the film production crew to shoot on the Island. 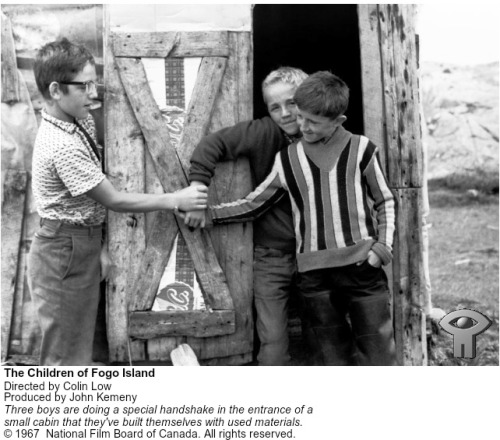 In the mid-1960s, Fogo Island was facing significant economic headwinds. Less than 5,000 people called the Island’s 10 fishing communities home. With provincial government policy favouring wholesale resettlement of Island residents there was real fear that their way of life was foundering.

Far removed from political decision makers and the machinery of government, it was not clear whether Islanders could enlist support and empathy for their communities, or even work together and alter course to avoid what increasingly looked like a bleak future.

Enter an improbable and unexpected intermediary, the National Film Board of Canada (NFB). The NFB had recently launched an ‘activist documentary program’ Challenge for Change (1967 – 1980) with the intent of making documentary film more relevant, of empowering communities to confront and examine tough issues – to mobilize action leading to social change.

Memorial University’s Extension Service was instrumental in introducing the NFB to Fogo Island and in recognizing the potential of a right fit with Island communities and the new program. Acclaimed NFB director Colin Low traveled to Fogo Island to meet with Islanders and gauge their willingness to explore the use of film as a medium to address local issues and advance community interests. From the outset, Low worked alongside local Extension Service officer and native Fogo Islander, Fred Earle and the rest as they say is history.

Not one film but a whole series of mini-films. It was meant to be a step in incorporating media into the democratic process. The creation of a communication loop as we called it. – Colin Low quoted in Challenge for Change: Activist Documentary at the National Film Board, p.17

Engaging Islanders and those in the corridors of power in an open ‘communication loop’ documented on film and then screened to the interested parties contributed to a reckoning, an awakening for all participants. Over time a shared resolve brought the Island communities together in a tightly knit band determined to preserve their homes and build more sustainable lives. The city suits also had ample opportunity to listen to community concerns and aspirations.

During a three year period, Low produced 27 short films on various aspects of Island life. The Children of Fogo Island was one of his favourites. It was a sleeper and an unexpected catalyst that helped pave the way to the community dialogue and collaboration that would become known as the Fogo Process.

Every time we’d go to a village, the first thing we showed was The Children of Fogo Island, and there were kids from all over the island appearing in the film. The energy of the kids made people think of their own childhood and what they loved about their own childhood: the freedom about it; the endless play; copying their dads on the boats. The other thing that struck people is the melancholy that you can see on Fogo Island, but we had an enormous demand for [the film.] Colin Low quoted in Playlists, Challenge for Change – Thomas Waugh, Ezra Winton, Michael Baker

This film speaks to me not as some kind of cultural ethnography piece, nor as a representation of a golden age of play. It may project elements of both though I suspect there were kids in various parts of the world moving to similar daily rhythms – particularly those whose lives were enriched by living in proximity to the natural world.

This is a film of simple pleasures, of children invested with trust to explore their landscape, their abilities, their friendships. In the context of play, they were in possession of a resoundingly powerful trifecta: 1) the kids had space to roam freely; 2) they had time to make their own fun; and, 3) they had friends to share adventures with. And now for the bonus round with a cherry on top, they were acting independently without ongoing adult oversight….

I hope you enjoy The Children of Fogo Island which is available for streaming at NO cost here, or by clicking on the image below. Many thanks to the NFB which for decades has made a large number of titles in their library freely available to Canadians. With the advent of digital delivery platforms they have been able to extend this generosity to international audiences too.

Do you have a favourite film/video clip that shows kids at play? Send us a link in the comments feature, or tag @PlayGroundology on Twitter.