World Children’s Day commemorates the joys of childhood as well as the responsibilities of families, communities and governments to safeguard children’s rights including their mental, physical, social and economic well-being.

First established in 1954 as Universal Children’s Day, it is celebrated annually on November 20 “to promote international togetherness, awareness among children worldwide, and improving children’s welfare.”

In 1989, the General Assembly was profoundly concerned that:

the situation of children in many parts of the world remains critical as a result of inadequate social conditions, natural disasters, armed conflicts, exploitation, illiteracy, hunger and disability…

The Convention has been ratified by most countries with the significant exception of the United States. Current status of signatories and parties to the Convention is available here on the UN site including a list of declarations and reservations.

Article 31 of the Convention states that:

…every child has the right to rest and leisure, to engage in play and recreational activities appropriate to the age of the child and to participate freely in cultural life and the arts.

That member governments shall respect and promote the right of the child to participate fully in cultural and artistic life and shall encourage the provision of appropriate and equal opportunities for cultural, artistic, recreational and leisure activity.

Play is an integral component of any holistic celebration of childhood. The opportunity for kids to play independently in a secure environment is central to their well-being and their discovery of the world around them. For an in depth treatment of play considerations associated with Article 31, please consult General Comment 17 to the Committee on the Rights of the Child by the International Play Association.

Communities in various parts of the world are celebrating this day with play related activities and programs. In Alberta, Canada a full day has been set aside for the Calgary Play Summit with a goal of Transforming Calgary into the City of Play.

Calgary has been on a roll for a few years with events, policy development and programming. In 2017, the City hosted the International Play Association (IPA) Triennial Conference. The Calgary Play Charter was signed to coincide with the conference bringing together “leaders from 36 Calgary and area organizations joined Mayor Nenshi, the Canadian Ministry for Sport and Persons with Disability, and MLA Robyn Luff in a celebration of play, community and partnership to sign this play charter.” More recently, the City took a leadership role in developing a guide to champion Mobile Adventure Playgrounds.

There is much more going on for, with and by children. Kids are the change that adults can’t contain as referenced in the UNICEF video below. How can we encourage our communities and governments to engage?

All the best from Nova Scotia on #WorldChildrensDay

I pinched this ‘Four asks’ infographic from a Rethinking Childhood blog post published today by Tim Gill – it’s well worth a read. It’s brilliant that the Children’s Play Policy Forum has created a big tent for play where policy makers, researchers and practitioners from across the UK can get together to advocate and take action. 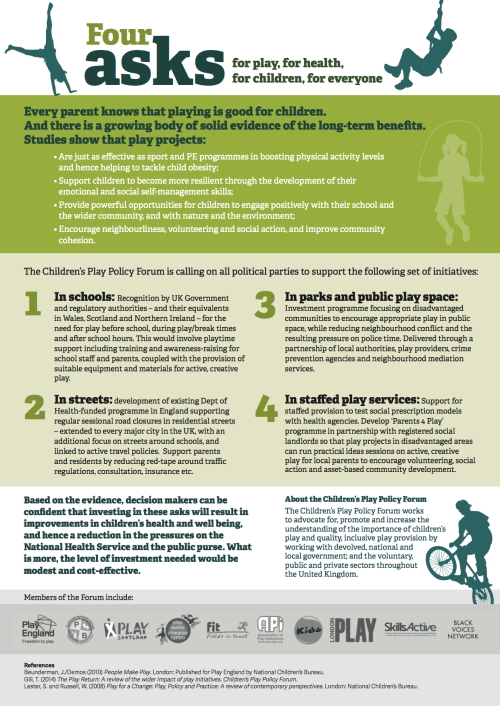 Four asks – for play, for health, for children, for everyone. Click to enlarge.

In the UK, non-governmental organizations – Play Scotland, Fields in Trust and London Play et al – that focus their work almost exclusively on children’s play have over the years become strong voices influencing national and local government policies. This is an important strategic difference when looking at the Canadian experience. Where is our Play Canada, Joue Québec, or Toronto Play?

It’s not that there is a lack of dedicated and fun loving Canadians who recognize and promote play. They range from educators, health care professionals, designers and landscape architects to journalists, municipal recreation leaders, parents, physical activity enthusiasts, public servants developing policy and programs and all the others who are part of the play continuum. But where are the unifying Canadian voices that focus exclusively on play and its benefits? It’s very possible that I’ve missed them and if so, I would like to get acquainted with any such groups. 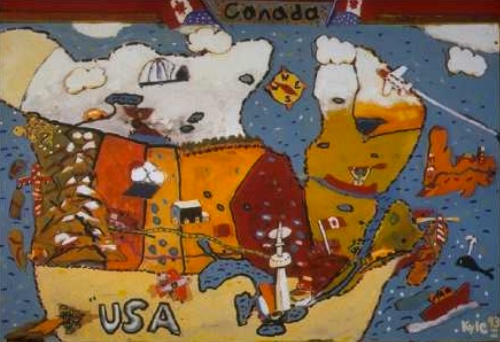 Spirit of Canada by Kyle Jackson

We Canadians wouldn’t be remiss in getting better acquainted with the best practices of other jurisdictions including the UK to see what could fly here. Never mind that, we could start sharing our own best practices related to play more broadly. In addition, a clearing house of information on children’s play research and initiatives from our various orders of government and non-governmental agencies would be a step in the right direction.

I just signed up with the IPA last April after meeting with the association’s President Theresa Casey. She was kind enough to take time out of her day and have a coffee with me looking out over Edinburgh’s Princes St. Gardens where on that day daffodils bobbed riotously in the wind and kids rolled down the grassy incline. What great work this IPA crowd is doing – more on them in a future installment of PlayGroundology……

Do read Tim Gill’s post – Politicians told: invest in play, and children, families and communities will all see the benefits – then ask yourself, what can we do in Canada? What can be done in other countries?