Halifax, Nova Scotia, home of PlayGroundology, is in the midst of a municipal election cycle. Voting at the polls is slated for October 17. This year, I’ve embarked on a grass-roots, non-partisan civic project. It’s quite simple, I reached out to candidates with a brief questionnaire related to children’s well-being. Their responses will shed some light on their priorities and interest in making Halifax a more child-friendly city.

Not having any real experience in asking candidates questions for the public record during the course of an election, I’m not sure what to make of the participation level. If any readers have experience administering surveys to candidates running for office at the municipal level, I’d be happy if you could share some insights.

A quick note on methodology:

The preliminary results look at response rates for all candidates, subsets of all candidates and district specific information. Many thanks to the candidates who made the time to respond to the four questions related to child well-being.

Readers, what are your thoughts on a 54% response rate for the questionnaire? Out of the 81 reachable candidates for Council, 44 responded and here they are. 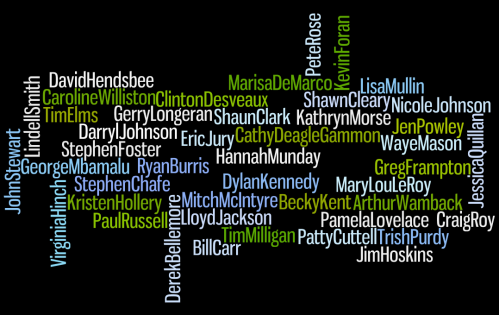 There are 11 incumbents on the ballot this time around. There were 6 of the 11 who did not respond to the questionnaire. 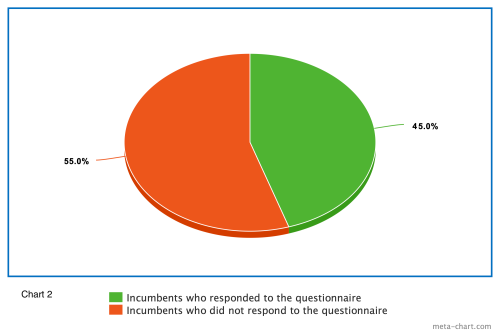 We would be better served by our incumbents – given the work they’ve done and the experience they’ve gained working for the city and their constituents – if they would give more consideration to participating in all questionnaires that seek to increase understanding of issues that have a broad impact.

Thanks to the incumbents who did participate – Shawn Cleary, David Hendsbee, Waye Mason, Paul Russel and Lindell Smith.

Overall, the non-incumbents had a stronger performance than the incumbents vis à vis responding to the questionnaire as Chart 3 below illustrates. 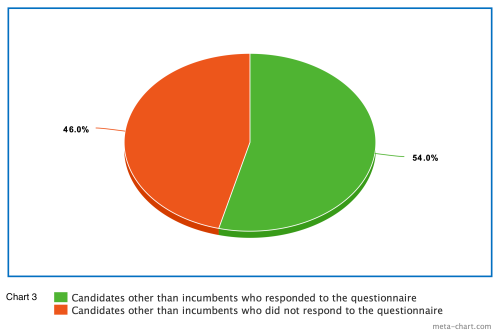 I would like to share two final charts as we wrap up this overview focusing on candidate participation and lack thereof. The two charts below provide a breakdown by district of the percentage of candidates who responded to the questionnaire. You will note that there is a great deal of variance.

In Districts 1 through 8, with one exception, participation rates are at 50% or above with District 8 coming in at 100% participation.

All submitted candidate responses will be posted online over the coming week. I am in the process of working on an opinion piece for The Chronicle Herald that I anticipate will be published next week. It will touch on the roll-up of candidate responses to the four questions and a reflection on the municipal election.

Once again, thanks to the candidates who responded to the questionnaire, I look forward to sharing your thoughts and insights.

If candidates who have not yet participated are interested in submitting responses, I would be pleased to include them online and in the opinion piece roll-up.