Has there been ample traipsing around museums, trudging through shopping centres, interminable amusement park screeling and screeching, enough blue-lipped, sand-encrusted, beachy shivering for your young ones this vacation?

For the seven or eight and under crowd, maybe it’s time for a playground holiday visit. They’re fun fueled, inexpensive, physically active outings. Often there’s unfamiliar equipment for the kids to scramble about on, something they’ve never seen before. And what better place to meet local kids for fleeting friendships.

This August we’ve had a week in the islands, The Magdalen Islands in Canada’s Gulf of the St. Lawrence. We’ve hit a few playgrounds between beach and backyard games. The kids want a return engagement with every one of them. Here’s a quick slide show of les terrains de jeux des Iles. 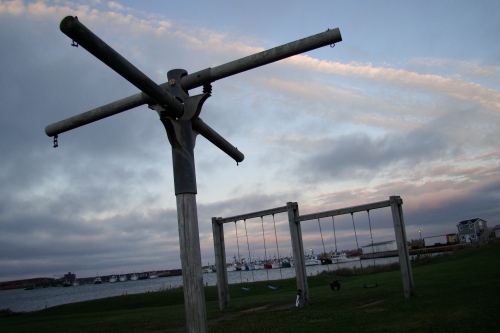 – check the local town or city’s website, if you’re lucky playgrounds will be listed. One of the best I’ve come across is New York City;

– check the local school board for a listing of schools. Inquire to determine if school playgrounds are accessible after hours and during summer holidays. Unfortunately that’s not the case in all jurisdictions;

– check the KaBOOM! Playspace Finder, great for US and parts of Canada;

– if you’re very lucky there will be a local playground blogger where you’re going. Here’s a little shameless promotion of my Halifax, Nova Scotia – PlayGround Chronicles. Other playground bloggers are noted in the left hand column;

– ask, or do the wander walkabout.