As a kid, the ultimate playground fantasy was to go up, up and over on the swings. No matter how furiously we pumped, whether in a sitting or standing position, the arcs we traced rarely took us much higher than the first 90° quadrant.

By my unscientific polling, the curiosity, if not the desire, of going up and over is universal. It’s a theme all my kids have talked and wondered about it at some point. And what parent has not heard the insistent refrain, “higher, higher” while pushing their child skyward to touch the passing birds, the clouds, the sun?

We all talked a good game of how exciting it would be to launch ourselves up and over wrapping the chain link around the bar and hurtling through a full 360° sky scrape. It was all pie in the sky musings though. None of us had the strength, ability or courage to loop the loop. 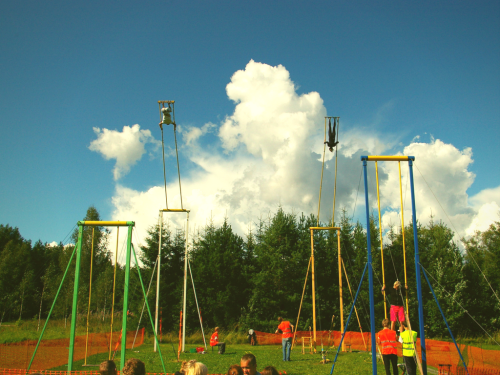 In fact our loop the loop dreaming was likely a physical impossibility. The chain links that our swing seats hung from were two to three metres in length. Chances are they would have collapsed if we were ever able to propel ourselves into the top of the second quadrant. Kiiking’s inventor Ado Kosk overcame this by using rods to attach the swing seat to the spindle and the rest, as they say, is history.

In Estonia, there is a cultural tradition of communal swings in towns and villages, swings that can accommodate multiple people at a time. Kiiking is a radical departure defining a new tradition of sport and athleticism. Since its invention in the mid-1990s, kiiking has won over enthusiasts in New Zealand, the US and various European countries. What are the chances of this new sport ever being part of an Olympic line up?

Look no further if you’re in search of a good workout and a risky business adrenalin rush – kiiking may possibly be your kind of activity. Kids are kiiking and I like to think that I would have the nerve to alley-oop, loop the loop. Tying in feet and hands, as is frequently done in competitive kiiking, is a safety factor that appeals to me.

Don’t ask me why but I think this late 20th century sport would be right at home as a component of Scottish highland games, or a modern day circus, perhaps even going back in time to the era of Astérix and Obélisk. Speaking of cartoon characters, couldn’t you just see Fred and Barney of Flintstones fame having a go with this?