Back in the spring of 2011, I wrote a post on Paris playgrounds. MJ, one of my workmates was there and took a couple of photos for PlayGroundology. At the same time I came across an artist’s rendition of of the playground that was to be built at the redeveloped site of Les Halles.

The terrain d’aventures opened in early October this year. The video below gives a taste of the unique equipment that makes this new play space a star attraction for Parisians on downtown outings in the 1er arrondissement.

h
The Mayor and his closest aides were there as well as France 3 Paris Ile-de-France TV. Unlike a playground opening earlier this week in Lisbon where there were no kids on camera, Les Halles features quite a few testing out the fun that’s packed in and parsed out over 2,500 square metres. 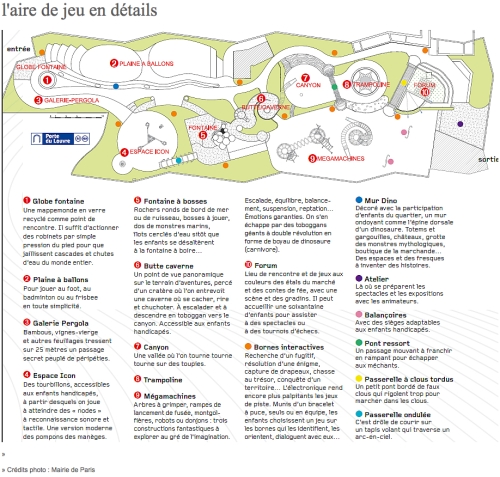 If you’re Paris bound, check here for details. The playground opens at 10 in the morning and currently kids can only play in it for 1 hour per day. The maximum capacity for the playground is 100 kids per hour. Reservations are required and entry is free.

Click through on the image for a full photo gallery.

Don’t stop the fun at Les Halles. Check this list of Paris playgrounds.

All images courtesy of the Ville de Paris.

Paris is a city of passion. Embraces in bustling boulevards like Doisneau’s iconic Le Baiser de l’Hôtel de Ville are synonymous with romantic abandon. Not everyone has the good fortune to visit the City of Light in the first flushes of love. So if you’re in Paris with the kids and it’s not all romance all the time, les Parisiens have playgrounds too.

To help out visitors, the Ville de Paris has compiled a list of playgrounds throughout the city. Organized by arrondissement, the list provides the address, the types of equipment and suggested age appropriateness for each playground. Using Google Street View, you can get a sneak peek at some of the venues and scout out an itinerary. With many playgrounds located in squares, there’s a chance that you’ll be able to find a resto or café with a terrasse looking onto the play area. It’s a great way to get off the beaten path and explore Paris’ neighbourhoods.

I lived in Paris for six months as a young adolescent in the early 70s. When we first arrived, we lived in a quartier populaire in the east end’s 11th arrondissement not far from the Père Lachaise Cemetery. The area was full of life, bustle and adventure. When my father’s friend returned to the city we had to vacate the borrowed apartment and look for a new place.

We wound up in the west end’s toney 16th arrondissement full of embassies, expats and expensive boutiques. Close to our Rue de Ranelagh apartment there was a small playground with swings and a seesaw. My brother and I used to play catch there our gloves smelling of baseball and hot summer afternoons.

There are also playgrounds in the centre of the action close to museums and major attractions. A workmate, thanks MJ, recently returned from a Paris trip and brought these shots of the playground at Le Jardin des Tuileries.

In addition to Les Tuileries, there are a few other playgrounds I’d like to play at with the kids when we finally do make it to Paris. Near the top of the list is Parc Villette to try out the dragon slide. See this slide and more in the flickr gallery – Paris Playground Scenes.

That year we lived in Paris I was 14. I received a weekly booklet of Métro tickets and was allowed to wander the city at will during daylight hours. Playgrounds were not on the top of this gawky teenagers list of things to do. They fell somewhere way behind les bouquinistes, a geeky interest in stamp collecting, daydreaming about beautiful girls and the magic of discovery. But even back then, with my head in the clouds I would have stopped and played had I come across this scene. 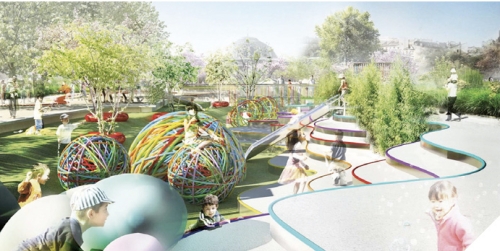 So Ville de Paris, kudos for the list and for making playgrounds a part of popular destinations like Les Tuileries, Notre Dame de Paris, Les Jardins de Luxembourg and the soon to be Les Halles, C’est un bon coup.

Here are a few quick links if you’re in Paris with the kids.

Among the Swing Set