Thanks for Coming Out to Play

Thanks to your visits, comments, likes and and retweets, PlayGroundology continues to grow. Here at PlayGroundology central we’re pleased to have generated 500,000+ page views from play peeps in over 115 countries and welcomed nearly 500 subscribers (sign up today it’s FREE). Over on Facebook we’re zeroing in on 7,000 followers with 3,000 and counting on Twitter.

In Montreal, Sorel, Ottawa, Toronto, California, Falkland, Edinburgh, Glasgow, Paris, Halifax and on the biways and highways of Nova Scotia – PlayGroundology’s home base – I’ve met a lot of fine people who give their all for play.

I’ve made online friendships with folks who are passionate about sharing their time and knowledge in support of kids’ play. It’s nice to see people getting revved up when they are part of making a wider range of play opportunities available for kids in public spaces.

Click through on image for active links and blast off to out of this world play!

This is a thanks and a shout out to all of you. As parents and caregivers we are the most the potent force, and sometimes the most overlooked,  that can work with local governments to inform their decisions around play provisions in public spaces.

Our family continues to have some of the finest times on the play beat. Plain and simple, kids love to play. It makes them laugh, provides ample opportunities to learn about their own abilities, assess risk and gain confidence.

And along the way, we’ve been learning a lot about science, health, psychology and fun. We’ve been introduced to games like ballon poire, a game that is unique to schoolyards and playgrounds in the province of Québec.

Thanks for joining the PlayGroundology crew. We’re skipping to the beat of play. I hope you’ll continue to drop in on occasion and let your friends know about this digital playspace.

In fourth position, it’s the then under construction Earthscape playspace at The Dingle in Halifax, Nova Scotia with 86 likes, 17 shares, 5 comments and a reach of 4,053 people.

In third place, all the way from Barcelona, Spain it’s Parc Diagonala Mar via the good folks at Creajeu with 154 likes, 45 shares, 5 comments and a reach of 12,277 people.

In second place, it’s the woven wonder wheel of wood (weekly alliteration quotient achieved) clocking in at 141 likes, 109 shares, 12 comments and a reach of 19,715 peeps. Though a source is noted, we are still trying to find out where this is. Can anyone idenify the place?

In the number one spot, pole position goes to a sign displayed at Telus Spark’s Brainasium in Calgary, Canada. Initially, the photo was incorrectly identified by Mr. PlayGroundology but readers quickly set me straight. Thanks to my cousin Gordon who flagged this photo for us. 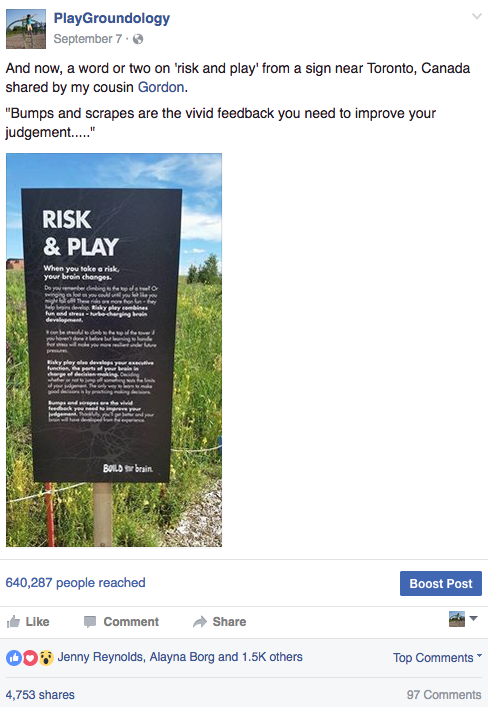 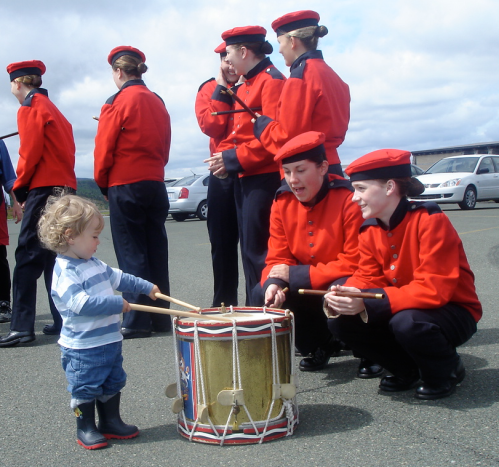 Ladies and gentlemen, the most successful PlayGroundology FB post ever with 1.5K likes, 4,753 shares, 97 comments. And 640,287 people reached.

Thanks so much for contributions, comments and your readership. Looking forward to a playful 2017.

As we embark on a new year, here’s a quick look back on 2015 with a month-by-month retrospective of popular posts from PlayGroundology FB. Thanks to readers and fans for engaging with us across PlayGroundology‘s platforms by sharing, suggesting and commenting on content. We’re looking forward to another great year in 2016….

Clicking through on the individual images will take you to the original posts. 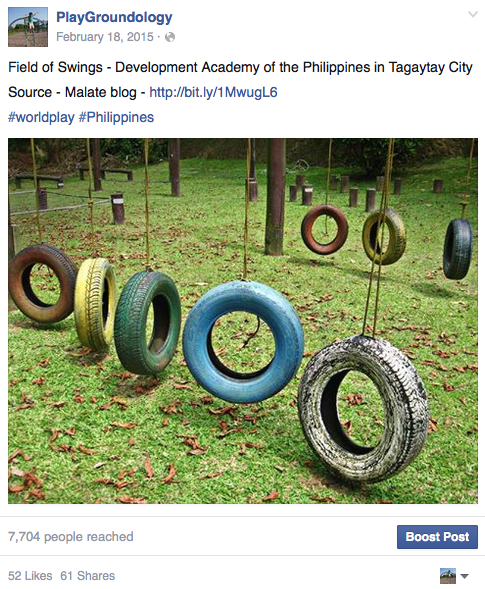 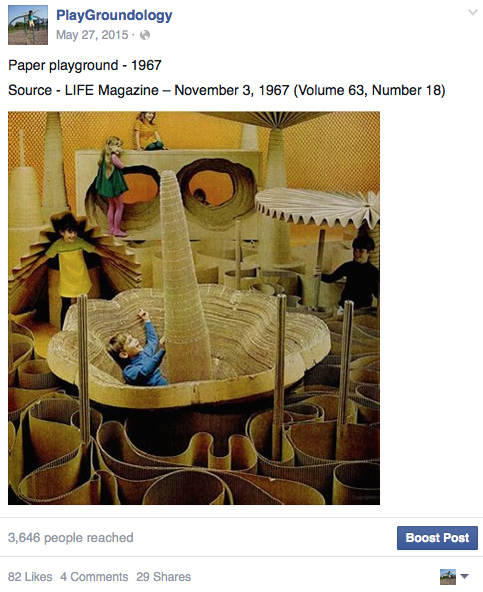 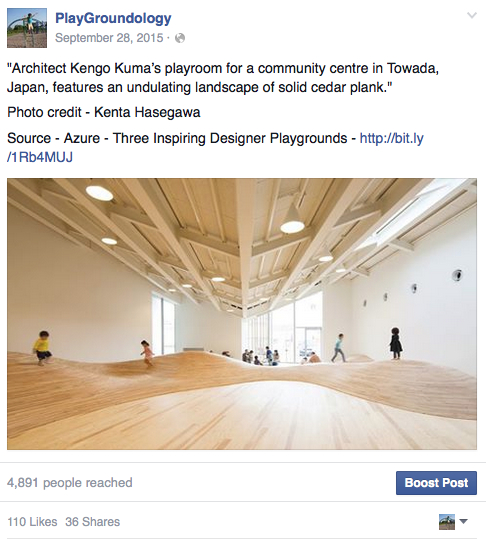 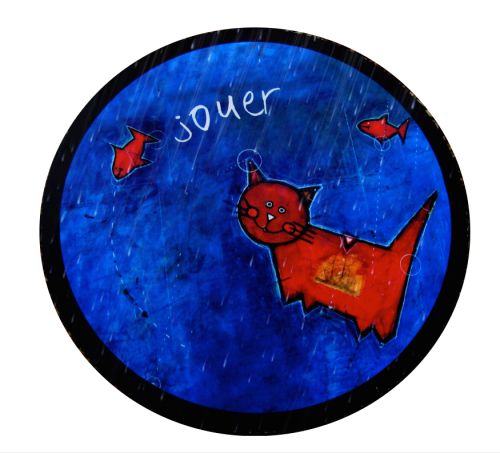 Boats exude an elemental mystery. Fresh water, or briny sea they hold the promise of adventure and discovery. Whether in wavy tossed expanse or landlocked far from shore they are dream makers for voyagers young and old.

Although I have no empirical evidence, I will hazard a guess and suggest that boats are among the top three transportation modes represented in play spaces around the world. The two others include the space class – rockets, shuttles, etc. and cars.

In Canada’s Magdalen Islands in the Gulf of St. Lawrence there is a recurring boat motif in playscapes throughout the archipelago. They are favourites with our kids whenever we visit and have a deep rooted connection to the people and the place.

Running across decks, scrambling up ropes, hiding in holds are activities for young sailors, captains, deckhands, swabs, pirates, fishermen, explorers, or warriors as they set off on an adventurous round of play.

In Halifax, PlayGroundology’s home port, we have a number of boat play spaces and even a submarine. Our iconic boat, a trawler by the name of Halcyon, was retired a few years back after more than 25 years of service in the name of fun. The video below is a short tribute to busy play days on the boat with our daughter Nellie-Rose, in her younger years, leading the charge.

Boats for Play I and Boats for Play II are flickr galleries with photos of boat playgrounds around the world. Does your community have any boat playscapes? If so, post some photos on PlayGroundology FB.

Boats are in my blood. My father and grandfather both worked in the shipyards on the River Clyde in Scotland. My grandfather was an avid model yachtsman and as I write this I look up at one of the trophies he was awarded – The Port Glasgow Model Yacht Club’s Tosh Memorial Shield which his boat the Fairy won in 1952.

As a young adult in the 1970s I had the opportunity to work on board two Canadian Coast Guard ships, an icebreaker in the Arctic and a buoy boat around Nova Scotia’s shores – quite an adventure for a lad of 16. All that to say that I do love a boat playground. You can pipe me on board anytime…

There is much art in the creation of vibrant public play spaces. Their aesthetic, their physicality and their spatial rendering push mind and body to new imaginative experiences. This presents a great opportunity for virtual galleries like PlayGroundology FB to curate news, design, research, advocacy and trends.

After a couple of years of experimentation, I’ve found the pace that I think I can maintain. Each weekday two new posts are added to the gallery which is purposefully light on words and heavy on visuals. For those looking for story, words can frequently be found via bitly click throughs in the accompanying text.

Each day is a discovery of what is new in the realm of outdoor play and what is informing and inspiring playscapes in a variety of countries around the world. In the past year, growth in page likes has gone from just under 400 to just over 1600 with a very high retention factor. If you haven’t stopped by, please do and invite your friends along also. You’ll come across some interesting fare.

When I show my kids photos and short video clips of some of these one of a kind playscapes, they are invariably in awe. I usually get two questions immediately, “can we go there?” followed by “why don’t they have any playgrounds like that here?” They’re both great questions particularly the latter. I don’t have any answers to that question yet for the community I live in but I’m working on it.

Material is sourced from mainstream media, specialty online publications, academic journals, original posts in the PlayGroundology blog, twitter, flickr, blogs, other FB pages, online national archive collections for those photos from yesteryear and anywhere else I can poke my inquisitive nose around. A big thank you to all those who created the original content. I do my best to cite and recognize sources and where possible link to them.

On occasion posts in the PlayGroundology FB Gallery turn into blog posts. One of those is starting to brew right now. Back in November I posted a photo of a play space in a Rio neigbourhood. For me there is an undercurrent of strength in this image that speaks to the power and promise of play. Just a couple of days ago, reader and play pioneer, Richard Garcia posted on PlayGroundology FB that he was in Rio at the playground in question. He has met with people in the community, taken more pictures and we’re now trying to connect to talk about this place of play.

I am continually surprised by the creativity, beauty and originality of the work I encounter trekking across the interweb in the quiet, expectant hours of early morning and the sometimes weary arc of night. Last week, from out of the blue a Polish designer and artisan popped up sending PlayGroundology FB a message about his work. Turns out that Barnaba Wójtowicz-Szczotka makes incredible bespoke playground equipment and accessories.

It’s the exchange and participation of others engaged and involved in the design and creation of public play spaces that makes curating PlayGroundology FB so enjoyable. Their posts and comments build on what I’ve been able to find. A great example is a video posted in the comment section earlier this week by Davies White Landscape Architect. The video provides a tour of the almost completed Dinton Pastures Country Park in England. Sit back and enjoy.

Occasionally, a post gets liked and shared at a rapid rate and really takes off. I have not really been able to determine what it is that makes these posts move as they do but in some way they catch the readers’ imagination. With 300 plus shares, 100 likes and over 52,000 views, the photo below outstrips anything that has been posted to date by a long shot.

If you are already a regular PlayGroundology FB visitor thanks for dropping by. If you haven’t yet had the chance, please check us out. The gallery is open 24/7, is updated 5 times a week and a lifetime membership is free. As an added bonus check Playgroundology FB’s likes for more great play related content on facebook.

If ever there was a day in Canada made for play, this is it. July 1 is Canada Day, a civic holiday celebrating our nationhood and the real beginning of the oh so short summer season. Here’s a shocking stat, only 5% of Canadian kids between the ages of 5 and 17 years old are getting the recommended levels of daily physical activity (Source: Active Healthy Kids Canada). So don’t waste any time, be active, get outside and play.

Just before you do though, could you nip over to PlayGroundology FB and ‘like’ your favourite image from 1 of the 3 below. The image with the most likes at the end of the day will become the new cover photo.

Haven’t been to PlayGroundology FB? Click through and ‘like’ us and you’ll get a couple of new images and stories every day of the week, except Saturday and the occasional holiday, curated from sources around the world. 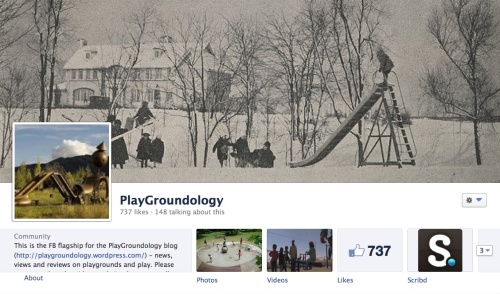 Join play lovers and advocates from Australia, North and South America, Europe, Asia and Africa on PlayGroundology’s Facebook channel for great visuals and news you can use from the global playground.

Drum roll please. Here are the 3 images to choose from from for the next PlayGroundology FB cover photo. 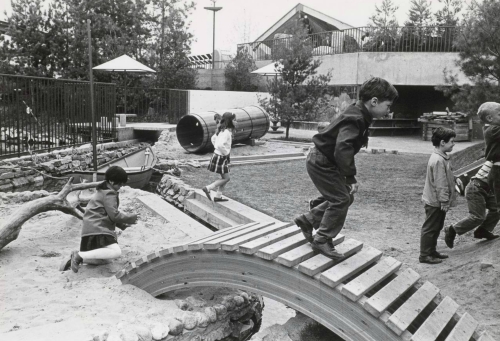 From the decks of The Halcyon overlooking Halifax Harbour