Category Archives: Playgrounds in the News

A Headline To Make Any City Proud

Casey is city of playgrounds proclaims a headline in a recent edition of the Cranbourne Leader, a daily published in Australia’s Victoria State. It’s a small yet wonderful story. It’s not often that local governments are commended for their commitment to playspaces, or choose to market their playground assets. 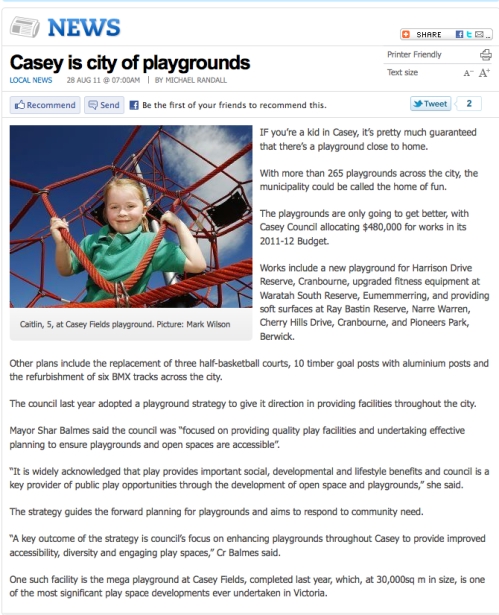 The story was picked up from a City of Casey news release that speaks to the local government’s development of a playground strategy in 2010. As it turns out, playground strategies are popular in Australia’s town and cities judging by the number that are posted online.

In many countries, local governments are the stewards of public space play. They make the zoning, planning, design, procurement and budgetary decisions. In the best case scenarios, the management of public play spaces presents opportunities for civic engagement through advisory committees, neighbourhood mobilization and other avenues. 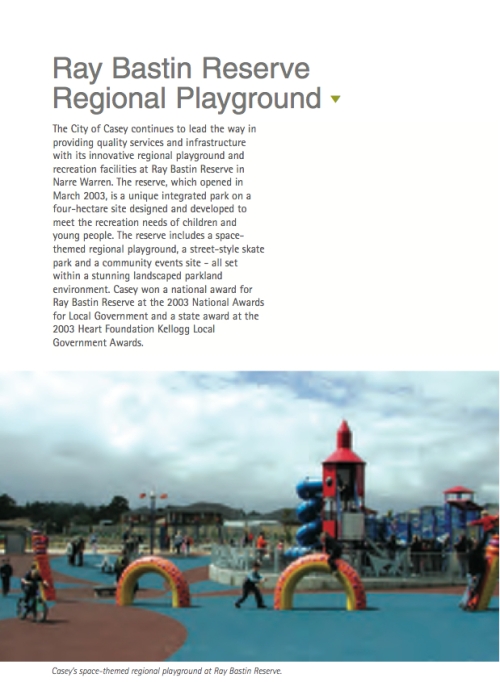 To date, I’ve only come across one program, Playful City USA developed by KaBOOM!, whose primary intent is to recognize best practices of local governments and their residents in making play a priority in their community. It is a model that could be adapted to other jurisdictions to encourage and assist communities to build on the good work for play that they have underway.

Bravo to the City of Casey and to local media for reporting on the city’s commitment to play.

Playgrounds in the Media II

It’s been a breathless sweep of media coverage this past week for Imagination Playgrounds, the Rockwell Group and New York City. A crowd of kids and dignitaries, including architect David Rockwell and New York Mayor Michael Bloomberg, descended on Burling Slip in Manhattan to put the first permanent Imagination Playground through its paces. There was big, blue fun and delicious visuals of dreamful play. This new world is sketched using a moveable feast of oversize building blocks, the outline of a sailing vessel and sand and water play. The scenes are ever changing.

According to this National Public Radio report, Imagination Playgrounds, in addition to representing a revolution in play and design, can also play a role in economic development. The kids also get their say in this piece spelling out what fun is all about. 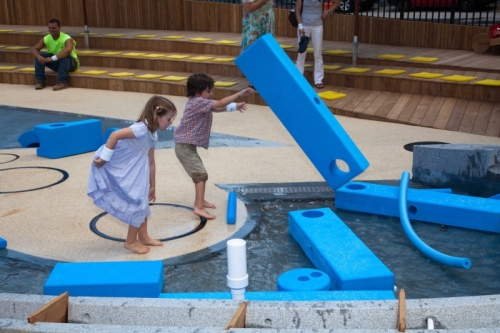 For background on the Imagination Playground concept visit their faq (frequently asked questions). A couple of other points worth noting – the Rockwell Group’s work is pro bono and a national partnership has been established with KaBOOM! to help implement and develop Imagination Playgrounds across the US. Finally as New York City is an enthusiastic supporter and the Mayor is apparently big on playgrounds, it’s only fair to link to the Mayor’s Office news release for those who may wish to give it a read.

Ka-BOOM! Keeps on Buildin’ and Boomin’ in the Gulf Area

Ka-BOOM! has been working with local communities building badly needed playgrounds in the Gulf area for the past five years. The non-profit issued a news release last week to mark the 5th anniversary of playground reconstruction in the region. To date there doesn’t appear to have been much pick up. It’s a great story of rebuilding that remembers the kids and their need to play. Read the release here.

Residents are collecting signatures to present to Basildon Council with the hope of saving a playground and sportsfield from redevelopment into a housing estate. Not everyone is happy with the prospect of the land that currently is home to the playground being sold to help pay for a state of the art sports facility at another location.

The petition campaign is being led by 73-year-old Terry Adam and is being reported in The Essex County Echo. Councilors indicate it’s still too early to provide a definitive answer on the playground’s fate. We’ll check in with the Echo and other local media to see how Terry and the save the playground campaign are making out.

Although it doesn’t always work, concerted action can turn the tide in the favour of community members who do not share the same vision as city hall. Witness the Friends of La Laguna who last week placed number one in the cultural landscapes category for the L.A. Conservancy’s Top 60 of the 60s People’s Choice Awards. Had it not been for civic engagement, La Laguna playground would have been bulldozed long ago. Read the PlayGroundology post here.

All photos courtesy of Imagination Playgrounds.

Playgrounds in the News

My geek factor is in the ascendant. As a budding playgroundologist I root around tracking down interesting tidbits about playgrounds – people, places, ideas, events and happenings. It’s a challenge to sate my curiosity.

Playgrounds are not driving the news agenda but they are registering blips here and there. Subscriptions to web based news alerts occasionally turn up jewels. Some stories resonate longer than others because they’re imbued with humour, or hope. Others have legs because they report on ingenuity, controversy, or tragedy. From time to time, PlayGroundology will post a selection of these stories for your reading/viewing pleasure.

Pigs on the Loose

Readers may be tempted to say in a pig’s eye about this first offering. Local media captured visual proof of, well not flying pigs, but marauding porcines, toughs who closed down a school playground in Stokesdale, North Carolina.

The pigs on the loose scenario was a first for Principal Amy Koonce. Kids at the school were kept indoors while the porkers, snouts in exploratory mode, had the run of the playground and surrounding area. WGHP TV’s Nicole Ferguson was there to record the freedom foraging for posterity – roll video.

Playgroundology contacted Nicole, now at WTVF in Nashville, Tennessee, to get her take on the playground pigs. “The pigs just had so much personality. They came right out of the woods to greet us. There they were all at once in a little pack sniffing around, right at our feet. It’s like they knew we weren’t there to capture them.”

Nicole and her crew got the assignment because one of their scheduled stories for the evening fell through. The playground pigs resonated with the viewing public generating lots of traffic on the station website. The day after the story’s initial broadcast, Nicole was at home packing for her move to Nashville. She heard ‘pigs’ and ‘North Carolina’ coming from the TV and then CNN anchor Tony Harris laughing away. CNN had picked up the story and were looping it every hour. It was all in a day’s work for Nicole. “It was hilarious. We couldn’t stop laughing when we were out there.”

There have been no further headlines for these fateful pigs since those heady days in September. It seems, for now at least, their playground days are done. Perhaps they’re busy with more predictable fare – heading to market, outsmarting wolves, or being best friends to the likes of Pooh.

Intrusive Parenting at the Playground

At Psychology Today, Stanton Peele covers a wide variety of subject matter in his Addiction in Society blog. A January post takes aim at parental overprotectiveness and micro-management at the playground..

It’s a short piece peppered with satire and worth the read if only for purposes of a self-assessment. Where are you on the anxiety – permissive scale when it comes to playground safety, child directed interaction with other kids, praise for playground feats?

Stanton provides six examples of less than desirable behaviours. I found myself nodding away in the affirmative to three of the six as behaviours I have occasionally indulged. No doubt many of us have fallen prey to one or more of these. It’s helpful to see them in reality check black and white, be aware and have a laugh at our shortcomings.

Do over coddled playground kids encounter more neuroses than kids left to swing, jump and run free? Read How To Make Your Child a Psychological Wreck – The Playground Manual and judge for yourself.

The Playground is Electric

In 2008, Daniel Sheridan won ₤5,500 to develop the idea of a see-saw that generates power. The BBC reported on the Coventry University design student’s innovation and his plans to test a prototype in Uganda.

Daniel was inspired to design the product following a volunteer placement in Kenya. The 23-year-old student saw a real opportunity linked to harnessing the energy and exuberance of children at play. Back in the UK he applied his research skills and came up with the idea of generating power through specially designed playground equipment.

The concept may seem like just a novelty in areas where the power grid is a given, a background hum of electric juice that few people think twice about. That’s not the case in many rural parts of the developing world. There is great potential to bring affordable power to communities that have very little, or no electrical power infrastructure at all. Daniel, as he told the BBC, has a dream. “Ultimately I would love to design a whole playground of different pieces of equipment that could generate enough electricity to power a whole village.”

Read the full BBC item here. PlayGroundology will be contacting Daniel and PlayMade Energy in the coming weeks to see how the young innovator’s journey to play power is progressing.

That’s it for the inaugural Playgrounds in the News. There will be four or five editions per year. Drop us a line if you come across something of interest.