A few weeks ago, I was on a panel examining risky play at Recreation Nova Scotia’s annual conference. What follows are a few resources that I shared with conference participants.

Risk, as it relates to children’s play and independence, is a subject that can arouse strong emotions. As parents and caregivers we all want to do our utmost to ensure that kid’s are safe. Sometimes our utmost can be too much and the kids themselves don’t get to assess and experience risk because adults intervene at the slightest sign of difficulty regardless of the setting.

One extreme of the risk spectrum is represented in the pages below (click images to enlarge) from Irish comic David O’Doherty’s satirical handbook Danger is Everywhere. 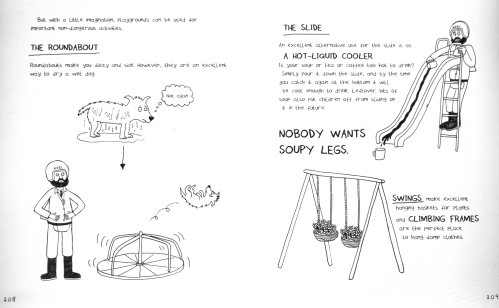 Playgrounds – full of nothing but dangerous human catapult machines… 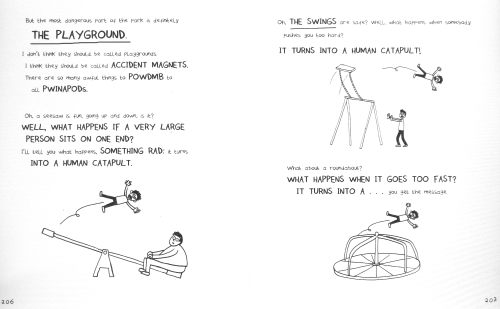 ….so let’s repurpose, or better yet make them safer

Regardless of the level of safety standards codification, it is impossible to eliminate accidents no matter how diligently professionals work to promote the perspective that injuries are ‘predictable and preventable’.

Here are a few resources that provide context about risk and play.

On the opposite end of the risk tolerance spectrum is New Zealand’s Swanson School – a no rules kind of place. Here’s a quick peek at what happens there during recess thanks to the Australian television show Dateline.

And for some historical perspective, here’s one of my favourite play clips from an adventure playground in London from 1964. This is closing of the documentary Seven Up! the first episode in an acclaimed British documentary series.

From 2012, here is an informative discussion on risk featuring Tim Gill, Darrell Hammond, Dr. Elizabeth Lange and others.

From earlier this year, there is the CBC Nature of Things documentary – The Power of Play produced by Nova Scotian production company, Tell Tale Productions and available on CBC Gem. 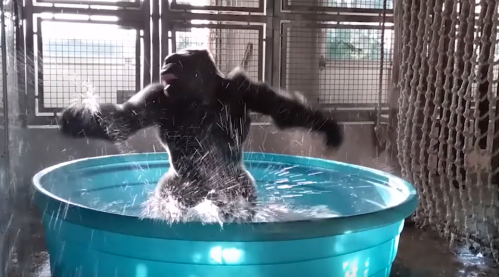 Children & Nature Worldwide: An Exploration of Children’s Experiences of the Outdoors and Nature with Associated Risks and Benefits – Children and Nature Network, IUCN and CEC (2012)

Five ways parents can help their kids take risks – and why it’s good for them – Linda Newman, Nicole Leggett, The Conversation (November 2019)

From obesity to allergies, outdoor play is the best medicine for children – Mariana Brussoni, The Conversation (June 2019)

Canadian Public Health Agency – Risk, Hazard, and Play: What are Risks and Hazards? and Playground Injuries

For PlayGroundology posts on risk related themes enter ‘risk’ in the search box.

If you have any resources you would like to share, or questions related to play and risk, don’t hesitate to drop me a note.

Thanks for hanging out. I hope you’ll drop in again….